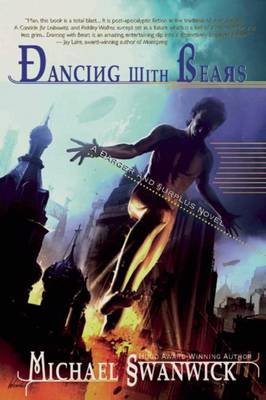 Michael Swanwick--The Hugo, Nebula, and World Fantasy award- winning author of Stations of the Tide--delivers a stunning Postutopian novel of swashbuckling adventure, dangerous women, and genocidal AIs. Dancing with Bears follows the adventures of notorious con men Darger and Surplus: They've lied and cheated their way onto the caravan that is delivering a priceless gift from the Caliph of Baghdad to the Duke of Muscovy. The only thing harder than the journey to Muscovy is their arrival in Muscovy. An audience with the duke seems impossible to obtain, and Darger and Surplus quickly become entangled in a morass of deceit and revolution. The only thing more dangerous than the convoluted political web surrounding Darger and Surplus is the gift itself, the Pearls of Byzantium, and Zoësophia, the governess sworn to protect their virtue. This steampunk-esque adventure explores the great game of espionage and empire building, from the point of view of the world's most accomplished con men, Darger and Surplus.