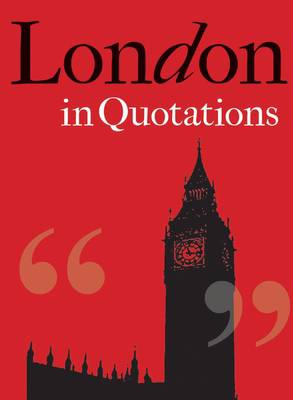 London is one of the world's great cities--a source of inspiration to generations of poets, novelists, journalists, and commentators who have visited or called it home. Be it praise or colorful invective, everyone, it seems, has something to say about the city and this slender volume--filled with wise, witty, and sometimes scandalous quotes--presents the full range of impressions it has made. "When a man is tired of London, he is tired of life; for there is in London all that life can afford." Samuel Johnson spoke highly of London in Boswell's famous biography, but not all have shared his enthusiasm. Since, the capital has been characterized as a "riddle," a "cesspool," and a "modern Babylon"--the last by none other than Prime Minister Benjamin Disraeli. No tribute to the city would be complete without reference to the notoriously inclement weather, which caused Jane Austen to complain that, "in London it is always a sickly season." For fans, foes, and those planning a trip to the city in the hopes of forming an opinion, this collection will be welcomed.