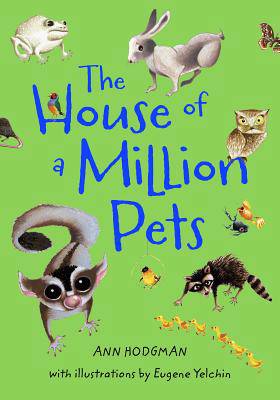 The House of a Million Pets

Ann Hodgman's basement is home to three guinea pigs, a cage full of birds, a big gray rabbit, a prairie dog, a bulbul (look it up), two little rabbits, a hamster, and twenty-six pygmy mice. And that's just the basement. Would your parents ever let you have that many pets at once? If Ann Hodgman were your parents, she'd let you. The House of a Million Pets, with illustrations by award-winning illustrator Eugene Yelchin, is the true story of what it's like to live in her barnyard--er, house--with more animals than you'll be able to keep track of. Any kid (or adult) who has ever owned or wanted a pet will love these furry, feathered, slimy, and scaly stories. The House of a Million Pets is a 2008 Bank Street - Best Children's Book of the Year. "Hodgman may not have had a dragon like Hagrid, but her tales are equally engaging, truthful and funny to readers of all ages. She's a James Herriot for the 21st century." --Kirkus Reviews "Through careful observation [Hodgman's] able to create a distinct personality for most of her pets, and Eugene Yelchin's black-and-white illustrations add a note of whimsy.... By the end of the book, you realize Hodgman is one Crazy Pet Lady. 'Good' crazy, though." --The New York Times