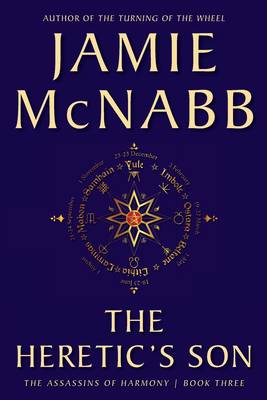 Edmund, chieftain of Clan Iredale, has struggled valiantly to avoid the outbreak of war. But now, his efforts backfire with shattering results. The Mother Metropolitan declares a holy crusade against Clan Iredale. The forces marshaling to attack stagger the imagination. Only Edmund's complete surrender can prevent his people's annihilation.

While Edmund bravely prepares to fight a hideous war he cannot win, Vlod, his personal magus, embarks on a much lonelier and much more perilous course of action. Against his chieftain's express orders, Vlod secretly works to develop a weapon that will shift the balance of power in Edmund's favor-a weapon that threatens to wipe out the religion of the Goddess and the God.

Vlod's heresy might prove Clan Iredale's only hope for survival-but it might also endanger the clans of the Inland Empire and the Holy Oregon greater than any war.

The Heretic's Son, The Assassins of Harmony, Book 3, weaves a heroic tale, set in a post-industrial future, in which physical survival and spiritual belief threaten to obliterate each other...and humanity.