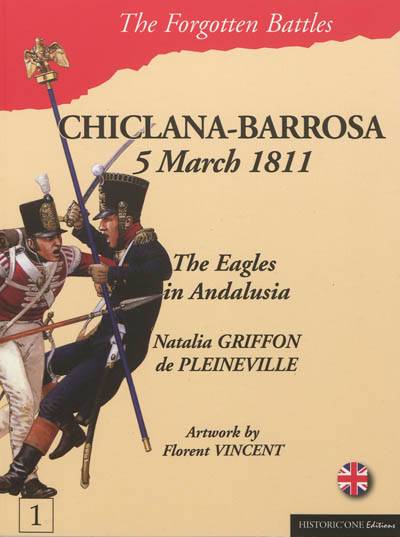 February 1811. Marshal Victor had besieged the Spanish city of Cáadiz for a year. Gênerals Manuel de Lapeña and Thomas Graham, at the head of Spanish and British troops, disembarked at Algeciras and at Tarifa and led their men towards Chiclana in order to attack the French lines from the rear.

On 5 March, the opposing armies ran into each other on ground overlooked by the Bermeja and the Barrosa towers ; the latter giving its name to the battle. The French troops commanded by Generals Villatte, Leval and Ruffin fell back before the Allied army. The fighting was fierce and the 8e Régiment of the Line lost its golden wreathed Eagle. Using French, Spanish and British sources and archives, drawing on numerous eyewitness accounts, the author captures the views of both sides of the conflict and provides a new and objective narrative in fascinating detail of this long-forgotten and little-known battle of the Peninsular War.