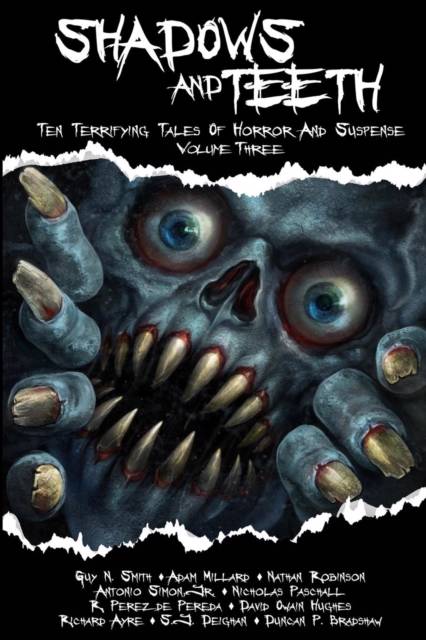 Out of the shadows and meaner than ever, volume three of this award-winning horror series packs international star power. Featuring ten brand-new stories by the legendary Guy N. Smith, the prolific Adam Millard, master of horror Nicholas Paschall, and others, this collection is certain to keep you up at night. Take care as you reach into these dark places, for the things here bite, and you may withdraw a hand short of a few fingers.

Cannibal House, by Guy N. Smith
--Jack Enfield's home comes with a history, and a hunger he can neither understand nor sate.

The House Wants What The House Wants, by Adam Millard
--As four college friends settle into their new home, little do they know that their home has plans for them as well.

Tree Huggers, by Nathan Robinson
--A group of friends chain themselves to trees to protest deforestation. None of them suspected that something in those woods was stalking them, looking to make them its next meal.

No Thanks, by Antonio Simon, Jr.
--A meek employee perpetrates a workplace massacre, knowing he can dispel away the consequences with the two most powerful words in the universe.

A Missed Phone Call, by Nicholas Paschall
--On her walk home, Gwen crosses a stranger who knows more about her than he puts on, and who draws her into a world she never knew existed.

Bernadette, by R. Perez de Pereda
--Amid crusades and inquisitions, a medieval Spanish priest makes a devil's bargain to save his niece's life and unleashes a horror into the world.

Picture Not So Perfect, by David Owain Hughes
--For too long has Adam suffered beatings and disgrace, but is his revenge worth the cost?

The Screaming, by Richard Ayre
--With his uncle's passing, Felix has inherited an old country home in the Highlands, and a ghastly curse that has followed his family for generations.

Cruciform, by S.J. Deighan
--Mark's pursuit of occult knowledge has culminated in his finally summoning a demon slave, but who can say which is really the prisoner and which is the master?

(Sub) Routine, by Duncan P. Bradshaw
--Oliver is a good boy; he does his chores and always does what the ghosts tell him to, until one day, he doesn't...