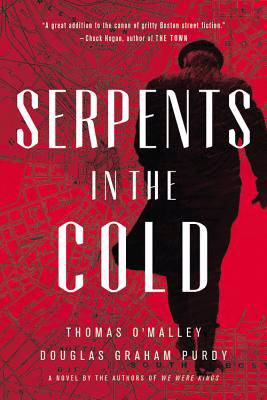 Serpents in the Cold

A serial killer stalks the streets of 1950s Boston -- and two friends take it upon themselves to bring him down. Post-war Boston is down on its luck and looking for change. A year after the Great Brink's Robbery -- the largest robbery in the history of the United States -- Boston is known more for its seedy underbelly than for its rich, historical past. The winter of 1951 is the worst in recent memory, and the Bruins are suffering another losing season. Like Boston itself, lifelong residents Cal O'Brien and Dante Cooper are struggling to find their identities after World War II. Cal has built a mildly promising life for himself as an employee of a company providing private security, whether to an honorable businessman who needs a night watchman or to an Irish mafioso who needs to have someone's legs broken. Dante is everything Cal is not. A heroin addict trying and failing to stay clean, Dante feels the call to do good after he discovers that his sister-in-law was the latest victim of a serial killer targeting disadvantaged women. Woefully unqualified, but determined to help, Cal and Dante take it upon themselves to track the killer -- but their daunting quest takes on dangerous consequences when the trail leads them to the highest ranks of city government. There are a few well-placed men who don't want Cal and Dante to solve this case. An absorbing mixture of history and suspense, told with a meticulous eye for detail and character, Serpents in the Cold is a moving exploration about two men battling for second chances.