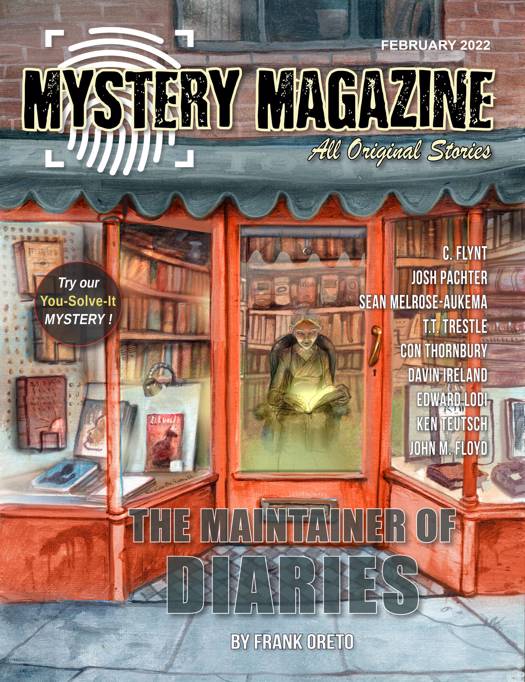 The stories we feature in our monthly issues span every imaginable subgenre, including cozy, police procedural, noir, whodunit, supernatural, hardboiled, humor, and historical mysteries. Evocative writing and a compelling story are the only certainty.

Get ready to be surprised, challenged, and entertained--whether you enjoy the style of the Golden Age of mystery (e.g., Agatha Christie, Arthur Conan Doyle), the glorious pulp digests of the early twentieth century (e.g., Dashiell Hammett, Raymond Chandler), or contemporary masters of mystery.

In our cover feature, "The Maintainer Of Diaries" by Frank Oreto, a retired police detective wants to solve the one real mystery he ever ran into: a used bookshop, some diaries and the patrons who disappeared without a trace.

"The Brimley/Cocoon Line" by Josh Pachter: Competition between childhood friends can be fun. But when the same friend wins time after time, the fun of it can fade ...

"The Intersection" by Sean Melrose-Aukema warns to be careful whom you trust with the stash.

"Going To The Dogs" by C. Flynt: Being a private eye in this town is a dog's life.

In "Breastman" by T.T. Trestle, a giant man who collects for a loan shark wakes up one morning and discovers he has somehow grown breasts and, to quote Seinfeld, they are spectacular.

In "The Misanthropist" by Con Thornbury, a man disappears off the west coast of Ireland while on a solo fishing trip. He is presumed dead. The family are looking forward to spending the inheritance but is everything as it seems?

"Wet Work" by Davin Ireland: Shane Decker and two of his criminal cohorts sit in a darkened van parked in the dead space between streetlights, watching a large Victorian property and waiting for the moment they can break in and rob the place. But there's a surprise in store.

"Dress Rehearsal" by Edward Lodi: Death rewrites the script when a group of actors rehearse before opening night.
"Everybody's Business" by Ken Teutsch: Pulling off a crime is tough anywhere.  In a small town it can be downright dangerous.

A You-Solve-It, "Smoke Signals," by John M. Floyd: To small-town sheriff Lucy Valentine, the loss of a local pawnshop looks like a simple case of arson. To her mother, retired teacher Fran Valentine, this fire smells a little suspicious.