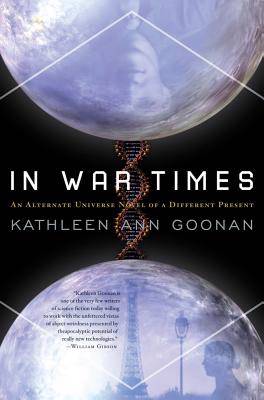 An Alternate Universe Novel of a Different Present

Kathleen Ann Goonan burst into prominence with Queen City Jazz, the start of her Nanotech Quartet. The Bones of Time, her widely acclaimed second novel, was a finalist for the Arthur C. Clarke Award in 2000. In War Times is deeply, satisfying SF.

Sam, the protagonist, is a young enlisted man in 1941 when his older brother Keenan is killed at Pearl Harbor. Seduced by a mysterious woman, Sam gives her plans for a device that will end not just the war, but perhaps even the human predilection for war. Sam spends his war years trying to construct the device and discovers only later that it worked. Sam falls in love with a spy, and they both become involved in preventing the JFK assassination in the 1960s. Over the decades it becomes deeply meaningful that his world is strangely transformed by the enigmatic device.