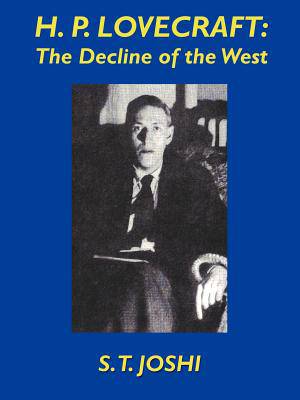 The Decline of the West

This book began as an expansion of my essay, "H. P. Lovecraft: The Decline of the West," in The Weird Tale, but very quickly became something quite different, to the degree that the two works have little save the title in common. I have always been interested in Lovecraft the philosopher, and in my Starmont Reader's Guide to Lovecraft (1982) I attempted a very compressed account of his philosophical views. To treat so complex a thinker as Lovecraft in a few pages was obviously untenable, even though I think those few pages at least convey the unity of his thought--perhaps better than this fuller study does. One reviewer, however, was correct in noting that I did not sufficiently integrate Lovecraft's thought and his fiction, and I have now attempted to remedy the failing.

I am still not convinced that I have really written one rather than two books here. Does Lovecraft's fiction really depend upon his philosophy? I wrestle with this question further in my introduction, but here I can note that I had great difficulty deciding upon the proper structure for this book. I deal with four principal facets of Lovecraft's philosophy--metaphysics, ethics, aesthetics, and politics--in Part I, and those same facets as applied to the fiction in Part II. It might have made more sense to juxtapose the corresponding chapters of each part, but I finally determined that this would be both methodologically and practically unsound; methodologically for reasons explained in the introduction, and practically because it would fail to demonstrate the interconnectedness of Lovecraft's thought and because in Part II I frequently rely upon conceptions expressed throughout the whole of Part I.