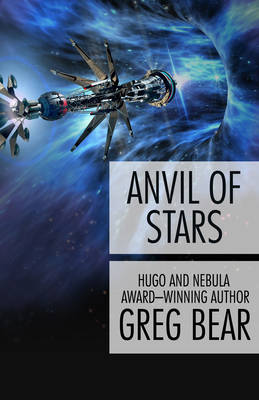 The "provocative and entertaining follow-up" to The Forge of God: Exiled from their planet, humans unite with one alien race in the fight against another (Publishers Weekly). The Ship of the Law travels the infinite enormity of space, carrying eighty-two young people: fighters, strategists, scientists--and children. After one alien culture destroyed their home, another offered the opportunity for revenge in the form of a starship built from fragments of the Earth's corpse, a ship they now use to scour the universe in search of their enemy. Working with sophisticated nonhuman technologies that need new thinking to comprehend them, they're cut off forever from the people they left behind. Denied information, they live within a complex system that is both obedient and beyond their control. They're frightened. And they're waging war against entities whose technologies are unimaginably advanced and vast, and whose psychology is ultimately, unknowably alien. In Anvil of Stars, the multimillion-selling, Nebula Award-winning author of Eon and other science fiction masterpieces "fashions an action-packed and often thrilling plot; by using each of the well-depicted alien races to mirror human behavior, he defines what it means to be Homo sapiens. . . . A gripping story" (Publishers Weekly).