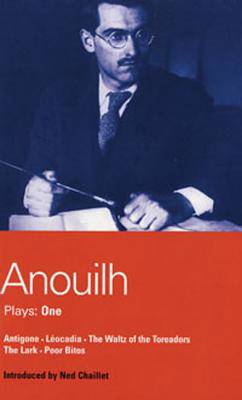 Jean Anouilh (1910-87) along with Jean-Paul Sartre and Albert Camus, was at the forefront of the post-war generation of playwrights in Paris. In England his plays were championed by Peter Brook. Antigone is a response to the German occupation of France and established his popularity in 1944 (the Germans ironically, thought that it was a pro-Nazi in its portrayal of King Creon and thus allowed its production); Poor Bitos, Anouilh's angriest play explores the act of judicial murder and The Lark is a version of the Joan of Arc story. All three plays show his fondness for reworking myth, history and legend. Meanwhile Leocadia, about an opera singer who dies after a three day love affair with a prince and The Waltz of the Toreadors, about a general whose mistress attempts to prove his wife's infidelity, represent another talent - for ironic, modern comedy.Anouilh is a poet but not a poet of words, he is a poet of words-acted, of scenes-set, of players-performing. (Peter Brook)