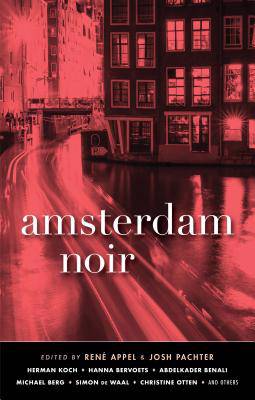 Every book in the Noir series serves as an introduction to a place. Besides the crime, the series and its editors have made it a point to address things like economic infrastructure, gentrification, and racial politics...Amsterdam Noir toes that line beautifully, touching on subjects like the impact of tourism, migration, and discrimination of Moroccans...In their introduction, editors Appel and Pachter say they want readers to know that bad things happen in Amsterdam, that the city 'also has its dark side, its shadowy corners.' However, what they ended up with is an anthology about a place where bad things happen not because of the psychogeography of the population, not because of corruption, gang violence, drug problems, or poverty, but because of human emotions--lunacy and jealousy. You could see that as a failure, but maybe it's not. Maybe the crime-free streets of Amsterdam are precisely what they wanted to show. Or maybe, like with most arthouse horror films, the point is that the monsters are not tied to the streets; they are always inside us.
--NPR

The latest in Akashic's popular city Noir series heads to Amsterdam, a city whose ambivalence is on full display in the stories collected by editors Rene Appel and Josh Pachter. At once, Amsterdam is an idyllic city of orderly cafes, canals, relative abundance and safety; on the other, it's a place that has long dealt in sex, drugs, and other activities traditionally categorized as vice. It's a sometimes combustible combination, and the stories in Amsterdam Noir go a long way to probing the everyday noirs of Amsterdam's many and diverse residents.
--CrimeReads

One of the best in a generally good series, with no story disappointing and the best genuinely gripping...This superior collection of noir fiction will appeal to all lovers of crime fiction--or, for that matter, good writing.
--Library Journal XPress Review, STARRED review

An appealing compendium, with welcome doses of local color and atmosphere.
--New York Journal of Books

Akashic Books continues its award-winning series of original noir anthologies, launched in 2004 with Brooklyn Noir. Each book comprises all new stories, each one set in a distinct neighborhood or location within the respective city.

From the introduction by René Appel and Josh Pachter:

Amsterdam has the amenities and, to a certain extent, the feel of a major world city, but one of its most attractive features is its relatively small size. It's easy to navigate on feet, by bike, and via its excellent public transportation network, especially with the semicircular perimeter of its famous Grachtengordel, or ring of concentric canals.

Like any other metropolis, though, Amsterdam also has its dark side, its shadowy corners--in other words, there is also an Amsterdam noir. No matter how beautiful, vital, and cheery a city might be, pure human emotions such as greed, jealousy, and the thirst for revenge will rear their ugly heads...with all their negative consequences. Amsterdam is a multidimensional city, populated by a wide assortment of social groups, and not all of those groups agree on what constitutes normal social values and mores. This results in a lively mix...and, as you will see, in problems.