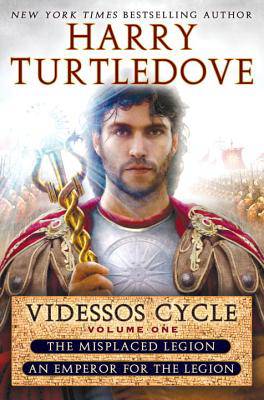 The Misplaced Legion / An Emperor for the Legion

Experience one of the most beloved series in fantasy--as could only be imagined by "the standard-bearer for alternate history" (USA Today).

Harry Turtledove's many New York Times bestsellers provide an intriguing take on history's most crucial moments, but he honed his speculative talents in a different genre: fantasy. The Videssos Cycle is the perfect fusion of the two. Collected here are the first two novels of Turtledove's one-of-a-kind saga, in which a Roman legion is transported to a strange realm where magic rules. THE MISPLACED LEGION

In a duel for survival, the Roman military tribune Marcus Aemilius Scaurus raises his sword, blessed by a Druid priest, against a Celtic chieftain, who brandishes a blade of his own. At the moment the weapons touch, Marcus and his legion find themselves under a strange night sky, full of unfamiliar stars, where Rome and Gaul are unknown. They are in an outpost of the embattled Empire of Videssos--a world that will test their skill and courage as no soldiers have ever been tested before. AN EMPEROR FOR THE LEGION

In the capital of Videssos, a coward and betrayer has seized the throne. There, behind great walls that have always made the city impregnable to storm or siege, he rules with the aid of dark sorcery. Overthrowing him seems impossible and the imperial army has already fled in panic from the savage victors. But there is no panic in the legion. Now Marcus Scaurus leads his men through the chaos and enemy hordes in search of winter quarters, to regroup and do the unthinkable: take the untakeable city.