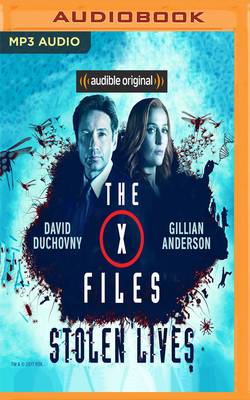 The division has been reopened, but nothing is as it seems in this electrifying follow-up to The X-Files: Cold Cases, starring David Duchovny, Gillian Anderson, and a full cast.

"In a world filled with shades of gray, we have to carefully choose which cloak we wear...."

Out of the ashes of the Syndicate, a new, more powerful threat has emerged. Resurrected members of this fallen group - now shadows of their former selves - seemingly bend to the will of someone, or something, with unmatched abilities and an unknown purpose. As those believed to be enemies become unlikely allies and trusted friends turn into terrifying foes, FBI agents Fox Mulder and Dana Scully become unknowing participants in a deadly game of deception and retribution, the stakes of which amount to the preservation of humankind. Based upon the graphic novels by Joe Harris - with creative direction from series creator Chris Carter - adapted specifically for the audio format by aural auteur Dirk Maggs (The Hitchhiker's Guide to the Galaxy, Alien: Out of the Shadows), and directed by William Dufris of AudioComics, Stolen Lives further explores the sonic landscape of Mulder and Scully's paranormal investigations while continuing the epic storyline begun in Cold Cases.

Demonic possession. Flesh-eating swarms. Mind-altering hallucinogenic trips. Listeners experience it all alongside Mulder and Scully in this original dramatization that reunites Duchovny and Anderson once more with fan-favorite characters: Walter Skinner (Mitch Pileggi), Cigarette Smoking Man (William B. Davis), and the Lone Gunmen (Tom Braidwood, Dean Haglund, and Bruce Harwood).The pieces have been set in motion. Those who were once savagely sought after will exact their revenge. Until their victims' lives are no longer their own.