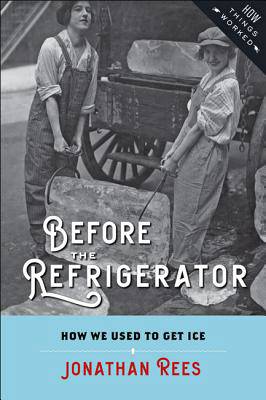 How We Used to Get Ice

During the late nineteenth and early twentieth centuries, Americans depended upon ice to stay cool and to keep their perishable foods fresh. Jonathan Rees tells the fascinating story of how people got ice before mechanical refrigeration came to the household. Drawing on newspapers, trade journals, and household advice books, Before the Refrigerator explains how Americans built a complex system to harvest, store, and transport ice to everyone who wanted it, even the very poor.

Rees traces the evolution of the natural ice industry from its mechanization in the 1880s through its gradual collapse, which started after World War I. Meatpackers began experimenting with ice refrigeration to ship their products as early as the 1860s. Starting around 1890, large, bulky ice machines the size of small houses appeared on the scene, becoming an important source for the American ice supply. As ice machines shrunk, more people had access to better ice for a wide variety of purposes. By the early twentieth century, Rees writes, ice had become an essential tool for preserving perishable foods of all kinds, transforming what most people ate and drank every day.

Reviewing all the inventions that made the ice industry possible and the way they worked together to prevent ice from melting, Rees demonstrates how technological systems can operate without a central controlling force. Before the Refrigerator is ideal for history of technology classes, food studies classes, or anyone interested in what daily life in the United States was like between 1880 and 1930.